Sophie Branson, a talented student of the Zakhar Bron School of Music (studio of Liana Tretiakova) received the highest award – first prize – at the Premio di Padova International Competition, which took place in Padova (Italy), from 11th until 18th of June 2017. 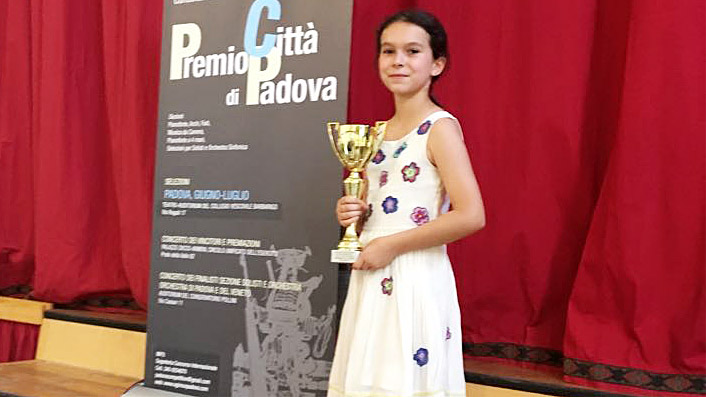 The Annual International Competition Premio di Padova was founded in 2002. The fifteenth edition, which took place at the beautiful Sala Teatro Del Collegio Vescovile Barbarigo (Padova, Italy), gathered more than a hundred pianists, string and wind players from all over the world.

Young violinists from Switzerland in the age category “up to ten years old”, were represented by Sophie Branson, who studies with Liana Tretiakova at the Zakhar Bron School of Music since she was four years old. At age ten Sophie has already achieved a lot. In this academic year alone she has appeared as a soloist with the Grenchen City Orchestra and the Soloists of Neuchatel Chamber Orchestra in Switzerland and also with the Omsk Chamber Orchestra and the Novosibirsk Philharmonic Chamber Orchestra in Russia, within the frame of the Siberian tour, organised by the Zakhar Bron School of Music.

“It makes me very happy that Liana’s work with Sophie brought us to this result”, says Inna Khriplovich, Sophie’s mom. “All these years we worked a lot: lessons at the School, regular masterclasses with the best professors, regular concerts in different counties. Today’s victory is a result of more than 7 years of collaboration”, comments Liana Tretiakova, principal of the Zakhar Bron School of Music.

Sophie took her victory less emotionally, but one can see by her smile that she is pleased with the result. It was her second competition. Sophie debuted in 2015, when she was eight years old. Then, at the Crescendo competition in Geneva, she received a second prize among the violinists of her age category. For the first time it was a good result, but the first prize in Italy is even better!