13 Reasons to Go With Us

1. Founded by the living legend and his successor
The Zakhar Bron School of Music was founded by the living legend of the violin world Professor Bron and his successor Liana Tretiakova in Zurich in 2010. Professor Bron is famous for having given this world more successful musicians than any other violin teacher in the modern history: Maxim Vengerov, Vadim Repin, Daniel Hope, David Garret, Daishin Kashimoto, Vadim Gluzman and dozens of other world-class soloists. Professor Bron is the Honorary President of the school and regularly gives masterclasses to our most advanced students. His alumna and former assistant for almost fifteen years Liana Tretiakova was honoured to co-found the school and to become his successor. She is our leading violin teacher and the principal of the school.

2. Supported by world famous musicians
The Zakhar Bron School of Music is acknowledged, respected and supported by some of the greatest musicians of our time: soloist Vadim Repin, soloist and conductor Maxim Vengerov, soloist and conductor Daniel Hope, composer and former rector of the Zurich University of the Arts Professor Daniel Fueter, Maestro Zubin Mehta, soloist Ilya Gringolts and other. Before the ZBSM was founded, the idea of creating such a school was supported by one of the greatest cellists of the 20th century Maestro Mstislav Rostropovich.

3. Chosen by highly professional musicians for their children
The Zakhar Bron School of Music was chosen as the place to obtain music education for the children of some of the highly professional musicians in Switzerland: two concertmasters of the Zürich Opera House, famous soloist Ilya Gringolts, Professor of the Geneva Music University Sergey Ostrovsky, a concertmaster of the Tonhalle-Orchester Zürich and several orchestra members of the Zürich Opera House and the Tonhalle-Orchester Zürich.

4. Created to prepare the next generation of Swiss musicians
The Zakhar Bron School of Music was created to provide young Swiss musicians with the highest level of classical music education from an early age and to continue the teaching method of Professor Bron. To achieve these goals, only highly qualified and carefully selected pedagogues teach at the ZBSM, and – apart from regular individual instrument lessons – masterclasses with well known professors and soloists are organized, as well as participation in various concerts and competitions in Switzerland and abroad.

9. High success rate at entrance examinations
The Zakhar Bron School of Music students have a high admission rate at music institutions in Switzerland and EU, such as: the PreCollege Music of the Zurich University of the Arts (ZHdK), the Arts and Sport Gymnasium (K+S) Zurich, the Arts and Sport School in Zurich, the PreCollege Music of the Geneva University of the Arts, and the Musica Mundi School (the international school for professional musical education and general studies, of Waterloo, Belgium) – to name only a few.

10. Concert performances in Switzerland and abroad
At the Zakhar Bron School of Music we consider live performances to be a vital part of a professional music education. Therefore, our students perform live a lot. For example in the 2019/2020 academic school year alone our students took part at 31 various concerts and festivals in Switzerland and abroad, including four concerts with chamber orchestras. Our most advanced students also played on stage with philharmonic orchestras and some of the most famous soloists in the world today, including Vadim Repin and Ilya Gringolts.

11. Covered by Swiss, local and international media
The successes of the Zakhar Bron School of Music students have been covered by national press (including Tages Anzeiger and Blick) and national television. Performances in other countries were also covered by local (France, Italy, Monaco, Russia etc) and international media – including The Strad, one of the most authoritative and trusted classical music magazines in the world (published since 1890).

12. Unique location in the centre of Zurich
The Zakhar Bron School of Music is located in the historical building formerly known as the Jecklin House at Rämistrasse 28 – just across the Kunsthaus. For several decades it belonged to Hans Jecklin, a passionate music lover himself. For generations the Jecklin House had been a sort of Mecca for Swiss musicians: it was the place where parents bought the first violins for their children, where orchestra musicians and soloists tried Gaglianos and Pressendas, where all the sheet-music was found, where lessons were taught in the upper floors, and where concerts were performed in the basement at the same time. Even though all of this is now gone, the spirit of music still remains in the house.

13. Non-commercial, not-for-profit Swiss association (“Verein”)
The Zakhar Bron School of Music is a non-commercial educational and cultural organization. We have never pursued any commercial purposes or activities, and will never do. The tuition prices at the ZBSM are below the costs, and our most advanced students are granted scholarships. This can only be possible thanks to the financial support of Swiss educational and cultural foundations as well as companies and individuals who share our vision and goals: our main supporter KuMa Foundation, the Nordic Cultural and Educational Foundation, the Charitable Foundation Gerber-ten Bosch, the Marc Rich Foundation, Hibou-Foundation, Adolf and Mary Mil-Foundation, Pro Helvetia Foundation, Private Bank Julius Baer, Drooms, the Senn family, the Sabella family, and many others.

Welcome from the Honorary President 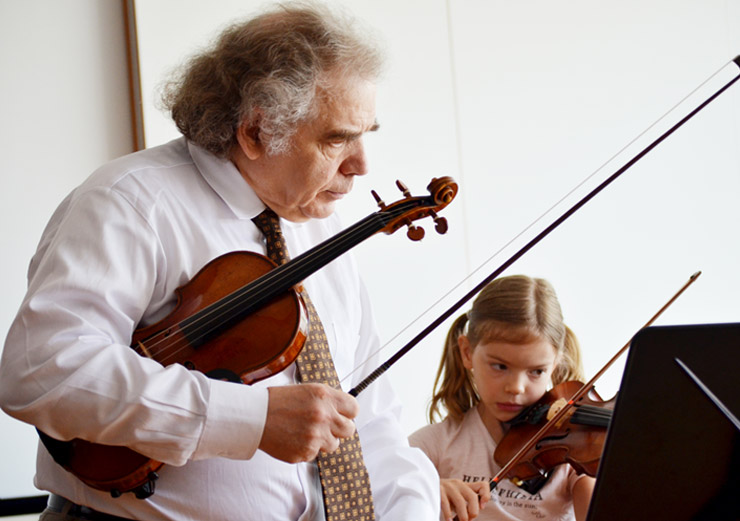 “One of the main goals of an accomplished musician should be to encourage and support young talents. My life is dedicated fully to teaching young musicians. This is why I am so excited about this new school, which is going to enhance the opportunities in the sphere of music education in Switzerland.

Our goal is to nurture musicians who will shine at international festivals and competitions and will be welcome in the most prestigious conservatories and music schools around the world.

With my name and participation I am fully supporting the idea of the new school, because I believe that Switzerland needs such an institution and I am happy that from now on it will be possible for children to study at this high level not only in Vienna, London, New York or Moscow, but also in Zurich, which offers a fantastic environment for creative growth”.